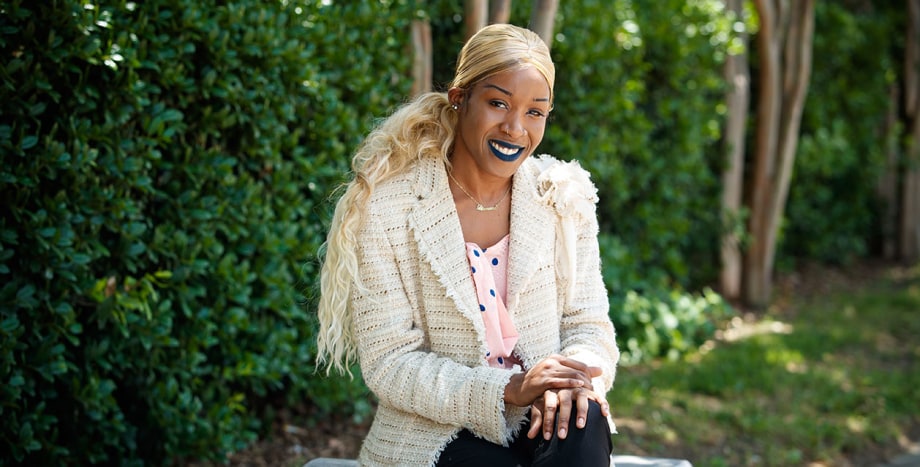 Diamond was looking for a change and so she went on Indeed to check out available jobs in the Dallas area. And that’s where she came across Generation.

“I went to the Generation website and I did research and was watching other people’s videos,” she says. “And from there I was like, it’s pretty cool how there’s someone out here who’s trying to help others. And maybe this could be good for me, because there’s things that I’ve ran away from and was scared to do.”

Like being a manager. She’s been asked to take on that role at past retail jobs she’s held, but always been too afraid to take the leap.

Generation’s Retail Career Advancement program helped change that mindset. From the moment Diamond started the application and interview process, she felt comfortable with the program and the people involved in it. “I just wanted to see where they could take me and how far I could go with this,” she says.

Building blocks for a career, not just a job

Activities Diamond participated in during class, like role playing, have given her a new outlook at work. “Taking me out of my comfort zone gave me so much confidence,” she says. “I was so excited and I couldn’t wait to come back to class and to see what I was going to learn next.”

She also learned how to juggle different commitments, since she started a new job at Nordstrom while in the Generation program. “I was jumping between both and I felt like I could do both of them instead of choosing just one,” says Diamond. “Taking that risk made me more confident. They [Generation] made me feel like I would be able to see myself where I really wanted to be.”

Generation made it easy for Diamond and her fellow students to succeed, by providing gas and bus cards and teaching them how to communicate when unexpected issues arose that impacted their ability to get to class. “They were building us for a career, not just a job,” she says. “They cared. It felt like family. It was not just going to a class and learning something. It was more than that.”

Generation staff Lou, Joshua, and Demetra played a big part in creating that family feel. “There’s a lot of young adults out here who don’t know where to go or what to do,” she says. “For them, to put this program out there to help young adults do better in life; they show so much compassion. All this I’m doing for them as well. They’re proud of me, and I’m so proud of them being proud of me. They will be the reason why I’ve come so far in things in my life in the future.”

Succeeding on the job

Since completing the program, Diamond has been in the top-two for sales in her department at Nordstrom, something she had never achieved before. She would recommend the Generation program to anyone else out there who needs a boost.

“Generation is for anybody who wants to go further in life and build something,” she says. “They brought things out of me that I didn’t even know was there. Now I’m excited about going to work. I have more confidence, and I’m happier than ever.

“Whatever you feel within that you can’t get out, trust me, they will bring it out of you,” she continues. “You will just feel like a whole new person. It will motivate you to want to go out there and do more.”